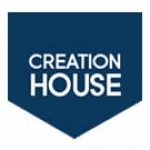 Creation House is well known and highly respected in the publishing world. It's part of Charisma Media, a Christian media company committed to proclaiming Jesus throughout the world. Charisma Media is comprised of several enterprises, including popular magazines such as Charisma and Ministry Today, and also best-selling books from various book publishing divisions, including Charisma House, Frontline, Realms, and Casa Creación. Long recognized as an innovator, the company has become known as the leading Charismatic publisher in the world, and multiple industry leaders and distributors have acknowledged it as the premier publisher of charismatic titles and health books from a Christian perspective.